The Spanish Quarters, or simply “I Quartieri”, an historic part of the city of Naples in Montecalvario district, arise in the sixteenth century when the Spanish crown “conquest” the Neapolitan kingdom.

FOQUS per i Quartieri Spagnoli

The viceroy Pedro de Toledo in 1532 establishes the reorganization of the urban layout that runs along the new route “via Toledo” (named after him): the east area of the street, strategically close to New Castle and to the Viceregal palace, the centers of political power, is assigned as accommodation for the Spanish troops and for their families. Thus the Spanish Quarters were born, set on a checkerboard scheme with six parallel streets of Via Toledo and numerous other small perpendicular streets. They are the evidence of a real ‘proletarian’ migration across the Mediterranean, from Spain to the southern Viceregal capital, which will mark the appearance and even then the prevailing social fabric of the neighborhood, influencing every development and every noble resistance to the new military and political power. 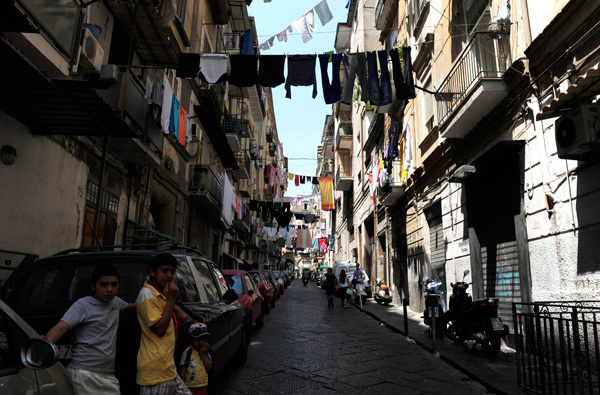 The original buildings, on one level, rise over time up to reach even five floors, to face up to the chronic shortage of housing for a growing population.

During the last glimpse of the Nineteenth Century, the urgent need to find a new expansion of housing area within the city will engage the radical mutation along the hill of Vomero, which will involve the western slope of the Quarters.

Today, the Montecalvario district has a population concentration of 29,917 people di 29.917 persone

(four times more than average, already high in the city): a small town within the historical city center.

The 19.1% of the inhabitants is composed by foreign population

16,4% one of the higher percentages of female presence of the city.

The availability of public green areas is the lowest (0,6 square meters per inhabitant)

and the lack of personal services is significant: just the 0.2% of the requests for children services despite the 10% of the neapolitan minors is residing in the district. In the district of Montecalvario is concentrated the highest risk of deviant behaviour at an early age and it has the highest percentage of young people (between 8 and 14 years) leaving school early and the highest rate of unemployment and inactivity in Naples.

After sacrificing to the building the last green spaces towards the hill of San Martino, since then and still more the Spanish Quarters assume a shape as one of the most disadvantaged and densely populated areas in the city: an orthogonal road grid, thick and with a very high human density, which hides unexpected open and wide spaces, among historic buildings and baroque churches, alternating with the “bassi” (basement flats) narrow as the legend goes, but often cleaned and cared as the standard social housing will never be. A socially problematic area characterized by precariousness and degradation, poorly integrated into the urban fabric of one of the major Italian cities. It is the symbol of the contemporary city’s contradictions and inappropriateness of the usual public policies.

This website uses cookies to improve your experience while you navigate through the website. Out of these, the cookies that are categorized as necessary are stored on your browser as they are essential for the working of basic functionalities of the website. We also use third-party cookies that help us analyze and understand how you use this website. These cookies will be stored in your browser only with your consent. You also have the option to opt-out of these cookies. But opting out of some of these cookies may affect your browsing experience.
Necessary Sempre abilitato
Necessary cookies are absolutely essential for the website to function properly. This category only includes cookies that ensures basic functionalities and security features of the website. These cookies do not store any personal information.
Non-necessary
Any cookies that may not be particularly necessary for the website to function and is used specifically to collect user personal data via analytics, ads, other embedded contents are termed as non-necessary cookies. It is mandatory to procure user consent prior to running these cookies on your website.
ACCETTA E SALVA